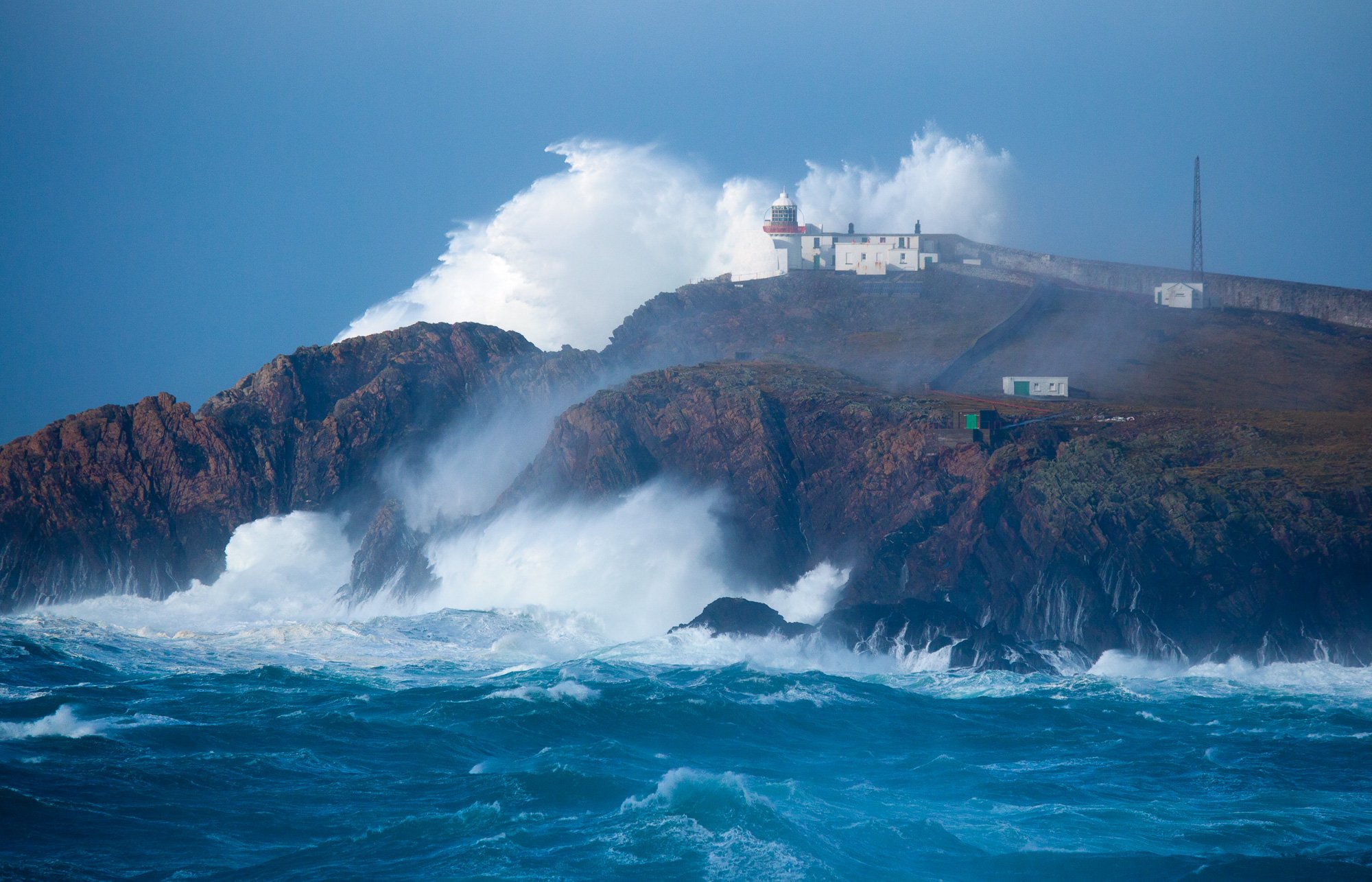 One of the few upsides to an Irish winter are the frequent episodes of stormy weather that sometimes provide dramatic photo opportunities. Every now and then, perhaps a couple of times each winter, the storms are accompanied by massive Atlantic swells. These are not just the standard stormy seas you migt expect from high winds along the coast, but deep-rooted ocean travellers formed by a giant depression in the mid Atlantic and pushed west onto our shores by jet-stream-driven gales. In early February this year just such a swell arrived, with a mean swell height of 10 metres. Much larger occasional waves could be expected, and with the shoaling effect on hitting shallow water, these might exceed 20m, or 60-70ft high.

I drove out to Belmullet in the far west of County Mayo, which was directly exposed to the westerly direction of the swell, and also close to deep water not far offshore so wave heights are maximised. As is typical with these events the wind was strong, reaching 70 knots in the frequent, squally showers of rain and hail. So not a day for  standing around waiting patiently for the right moment.

I stopped at a favourite location near Corclogh, where an unsurfaced track runs along the cliff-tops to a good viewpoint of Eagle Island and its lighthouse. Built in the 1830s along with a sibling lighthouse further north on the island, this spectacularly located light was manned until 1988. Over the century and a half during which it was manned there were several infamous storm-related episodes, including the complete destruction of the second lighthouse.

It was patently obvious that shooting from outside the car was going to be impossible. Even getting there was tricky, requiring me to run the gaunlet along one section of track frequently soaked by massive plumes of spray. So I set up the car at an angle to the wind and arranged my tripod across the handbrake area, with a leg in each front footwell and one in the back, and then mounted a Canon 100-400 zoom with a 5Dmk2. I set the ISO to 320 and opened the aperture completely, and then opened the window and framed up the island and lighthouse. Almost immediately I shot a series of images as a gigantic plume of spray exploded across the back of the light. The light itself is 67m or 220ft above sea level, so the plume of spray was easily 240ft high.

I sat it out through the furious squalls for the rest of the afternoon and didn’t see this repeated, so on this occasion luck was most definitely on my side. I did shoot a few more interesting frames, especially as the day was drawing to a close and the light at the top of the lighthouse switched on. However even with the ISO pushed up, keeping images sharp was very tricky with the car rocking violently in the wind. When I finally left the scene, I carried with me a lingering feeling of awe at the powerful forces of weather and nature I had witnessed during the day.