STORY BEHIND THE PHOTO – SCAVAIG RIVER, ISLE OF SKYE, 1997 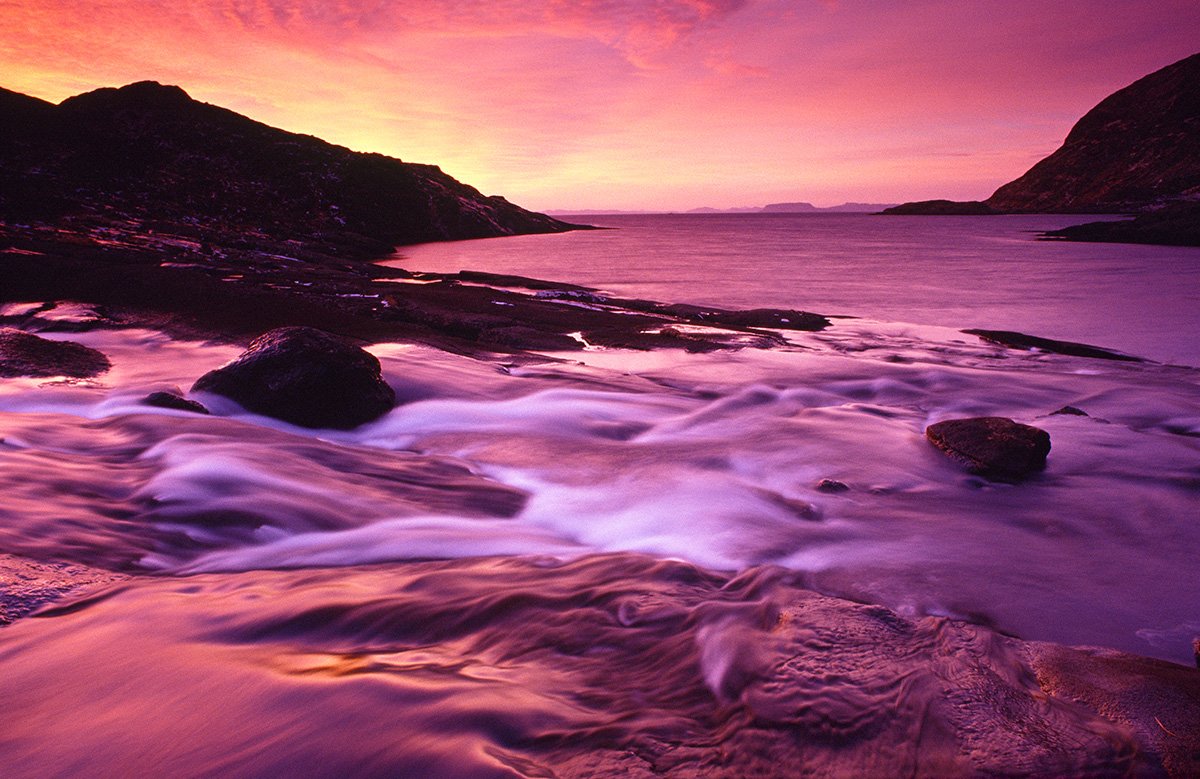 Loch Coruisk on Scotland’s Isle of Skye must be one of the greatest wilderness locations in Britain or Ireland. Surrounded on three sides by the gabbro peaks of the Black Cuillin, and open only to the sea loch of Loch Scavaig, it takes a solid day of rugged walking to reach it. The waters of the two lochs are separated by a narrow band of gabbro slabs across which the waters of the Scavaig River spill. It is said to be Britain’s shortest river at only a few hundred metres in length. On all but the best days of summer the mood here is implacably stern: dark rock, dark waters and sawtooth summits all around.

In January 1997 I made a two-week trip to the Scottish Highlands. Despite short daylight hours and the Scottish weather’s notorious propensity for driech and drizzle, I was hoping against the odds for some good light, although winter Munro-bagging was the main goal. Once on Skye however, hope was forced to concede to reality as leaden skies and icy, buffeting winds made any thought of climbing in the Cuillin impossible. The prospects for photography seemed only marginally better. So what made me think camping overnight at Loch Coruisk would be a good idea I can’t quite recall, but it turned out ok in the end – just!

At least I was warm on the walk in – 8 miles, and a climb of 300 vertical metres over a rocky ridge carrying camping and camera equipment will do that. The cloud was down on the ridge but I quickly dropped beneath it as I descended to the shores of Loch Coruisk and the banks of the Scavaig River. By the time I had set up my tent I was thoroughly chilled and sat in the porch out of the wind gloomily pondering the wisdom of everything I was doing. The cloud cover was thick and uniform, the light leaden and without any redeeming quality. By mid-afternoon even that was fading and I half-heartedly explored the surrounding area, aware of the long hours of darkness and confinement ahead, my mood about as dark and rough as the gabbro slabs. I was undoubtedly in a location of exceptional photographic potential, but it seemed unlikely I’d expose a single frame.

Fifteen hours of darkness left me plenty of time for sleep but even then I was strangely lethargic at first light. A combination of my own sullen boredom and the bitter cold made it hard to rouse myself from the warmth of a down sleeping bag. However within seconds of unzipping the tent door my mood was transformed to one of panicked excitement. The canopy of cloud was still there yes, but a tell-tale glow on the underside of the clouds to the south was a sign that the sun might rise into a band of clear skies on the horizon. But that part of the horizon was blocked by a high spur and I wouldn’t see direct light, plus I had no idea whether this omen would turn into anything. Within minutes I was energised and alive to the possibilities all around – just conceivably this misadventure might come good – but I knew I didn’t have long either way.

I limited myself to the area around camp. Even though the most dramatic scenery was looking north into the dark heart of Loch Coruisk and the Black Cuillin, the cloud was still hanging low and the possibility of beautiful direct light unlikely. So I focused on the view to the southwest out across Loch Scavaig and resolved to use the many chutes and rapids of the Scavaig River as a foreground. I made my way further and further downstream, stopping frequently to frame compositions before discounting them and hurrying on. The light was colouring the sky rich and vibrant hues of red and yellow as I reached the final steep slabs where the Scavaig River pours into the Atlantic. I was out of options, but I found a spot right in the middle of the shallow stream where small rapids created a nice left to right diagonal for the foreground. After that it came together quickly, although in truth I had no time for experiment or finesse – I settled on a balanced frame and mounted the camera on my Gitzo baby mountaineer tripod, a Nikon N90 loaded with Fuji Velvia 50 slide film with a 24mm prime lens. I think I used a 2-stop graduated neutral density filter, but I can’t be sure, and probably an aperture of f16 to allow a shutter speed in the 1 sec range. I don’t have many frames of this image or any variations except for a vertical version which gave more to the beautiful sky but at the expense of the diagonal dynamism of the river.

Looking now at the digital scan of the slide it is easy to see technical flaws when set against the pristine technical benchmark of modern digital photography. Whilst still good for a 30inch print there is a touch of softness in the background and the characteristic grain of film. Only photographers who have worked in film can really appreciate the no-excuses luxury of accurate focus fine-tuning and in-camera review. There is also the magenta cast so typical of Velvia’s colour palette which I could have corrected for on the digital scan but I decided to leave true to the original slide. This was the only image of real quality I made that week on Skye and whilst that seems a weak return, the excitement and memory of that morning sustained my motivation through to better times, both the following week on Ben Nevis and a much more successful summer trip to Skye a couple of years later.